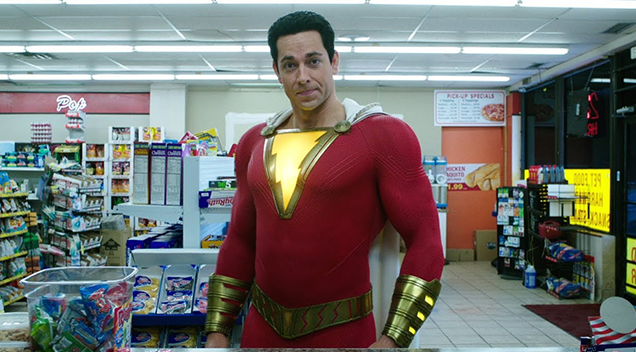 I’ve had a bit too much fun taking as many shots as I can at DC and their long line of sucky superhero movies that continually disappoint both with critics and at the box office. Aside from “Wonder Woman”, everything has flopped, failed and reminded us why their extended universe was never going to work, to begin with. “Shazam” is a first for DC in many ways: it’s the first film (besides WW) that was genuinely successful; it’s the first they tried comedy and actually pulled it off, and most importantly: it’s the first time I actually agreed to willingly pay to see a DC movie in theaters.

In Philadelphia, 10-year-old orphan Billy Batson (Asher Angel) is bounced from foster home to foster home trying to find his real birth mother. After narrowly escaping some bullies at his new school, he finds himself in a weird mystical world with an old wizard (Djimon Hounsou) who wishes to bestow his powers to Billy in order to have him fight the forces of evil. Upon saying his name aloud, Billy turns into Shazam (Zachary Levi) and learns how to use his superpowers and battle the evil Dr. Sivana (Mark Strong) who seeks the wizard’s powers for his own dark purposes after being snubbed by the wizard and siding with the 7 deadly sins instead.

After years of dark, brooding, humorless DC movies (and DC movies that failed when they tried to be humorous), it’s refreshing and pleasing to see a movie that is actually, legitimately funny and knows how to have fun with its source material. In a lot of ways, “Shazam” is like “Superman” meets “Big” and much of the film’s literal magic comes from the amazing performance of Levi; playing an adult looking/figured superhero who has the mind and spirit of a 10-year-old boy. Once he gets his powers, he uses them as a real child would; goofing off, playing tricks and pranks and having more fun pretending to be a hero than actually being one.

This approach is a welcomed and realistically amusing one. It’s ignorant and unrealistic (even in these kinds of movies) to expect everyone who gets superpowers will be altruistic and it’s displayed perfectly on both sides of the coin: with Shazam and Dr. Sivana. I really enjoyed the mythology behind the character, the idea that the villain was a disgraced potential champion and has made it his life’s goal to find the wizard’s chamber again to obtain the power he was denied that is then passed onto Billy. This creates a dual dynamic system that explains and connects the main hero and villain’s goals through vastly different and interesting upbringings.

As I said before, Levi really nails the kid-walking-in-daddy’s-shoes persona beautifully. You never feel that he is an adult, he just so naturally exudes the playfulness and spirit of a child in an adult’s body and that’s hard to keep up especially when two different actors are consistently playing the same character. Mark Strong is no stranger to comic book roles (Kingsmen films, Kick-Ass) and while he does a decent job, I can’t help but feel he could have done more and says more with his style and backstory rather than his actual personality/performance.

Jack Dylan Grazer is the unexpected gem in this film. He’s a great character, played by a great young performer and despite Billy being the youthful star, I feel Grazer is the real heart of the film and is someone we all have met at one point in our lives and I think it’s that darkly humoristic edge of his that makes him such a great character. For a film that is comprised mostly of humor, I was surprised at how dark and graphic Dr. Sivana’s scenes got and it makes me wonder about bringing my own kids to this film knowing that. It’s not a bad thing per se but it definitely feels like an uneven tonal shift at times and that’s probably the biggest problem with the film overall.