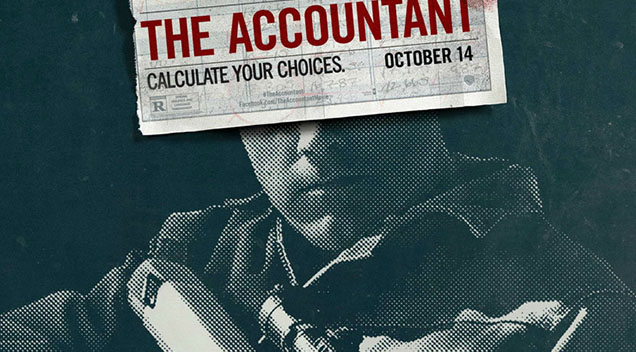 Don’t be fooled, while Ben Affleck’s character may be able to do your taxes, his insane skills in the art of murder and fighting come out when needed. Ben Affleck reprises an extraordinarily violent role while displaying that people with autism aren’t limited. But the overall view is a little questionable. What is amazing though is that all of the acting is completely on point. If the plot lacks anything, or the violence seems over the top and cheesy … the acting makes up for it.

The Accountant reveals itself in slow pieces between high action scenes. Its back story crawls out under viels of completely unnecessary black mail while it attempts to follow the loved plot of a parent trying to focus on the needs of their child and to protect them from the ways of the world. However, the focus is evidently taken away from either the parent or child trying to figure out the world; instead just rebelling against recurring issues without resolution.

With a tough father present in flash backs and the tricks of an autistic child self-soothing through learning martial arts and muttering nursery rhymes may be hard to believe, it is semblent of Rain Man in casting out of the ordinary perceptions on autism and possible autistic … uhm, abilities? However, this same dynamic breaks the trope of every action movie star being over the top focused and level headed in extreme situations.

The biggest issue this movie faces is that we aren’t really sure who is the bad guy and who is the good guy. Where is the line drawn? Are good guys just bad guys now? I’m a “cheer for the bad guy” kind of person so I’m super on board. Everyone’s a bad guy, except, we aren’t sure who is supposed to win in the end. The scene changes and many backstories will definitely keep you entertained and committed. One of those, you’re not laughing at it, certainly that would be uncalled for, but laughing with it. On some level the director O’Connor, and writer, Dubuque knows how they skewed any attempt at constructing a clear plot. They know what they did, is what I’m saying.

While you are getting the angst, violence, and clear nods to Asperger’s from Ben Affleck, Anna Kendrick brings a little more substance in as things thicken. She is both adorable and endearing while you watch the front that Ben Affleck builds to cover his alternate side of life.

There is too much going on, and also, at just the right pace. You will be committed throughout the film and while you might walk away thinking, man what was that? You could also walk away just the opposite in awe of having been enthralled for about two hours. Either way, The Accountant is worth a watch even if you wait for it to hit Redbox.