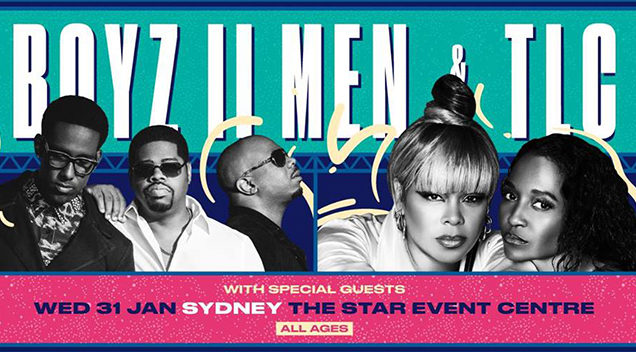 What:  With the colossal RNB Fridays Live wrapping up after a second successful year of multiple sold out shows, leaving fans and critics thrilled, Illusive Presents and Frontier Touring have joined forces to keep the party going in 2018 with TLC & Boyz II Men.

Leading the charge is one of history’s most influential female hip-hop and R&B acts TLC. These three empowered women, Tionne “T-Boz” Watkins, Rozonda “Chilli” Thomas and Lisa “Left Eye” Lopes, captured the world’s attention with their sassy and sophisticated R&B set against a socially conscious lyrical style. Tragically in 2002, Lopes was killed in a car accident. Refusing to call it quits in honour of their fallen sister T-Boz and Chilli have since continued to tour worldwide.

One of the music industry’s most elite and truly iconic R&B groups Boyz II Men will return Down Under this February. Over the past two decades Boyz II Men have given fans a rich catalogue of hits filled with smooth harmonies and enduring themes. Boyz II Men have won fans the world over with their soulful multi-octave sound and incredible vocals from mega hits like ‘End Of The Road’, ‘I’ll Make Love To You’ and ‘One Sweet Day (feat. Mariah Carey)’.