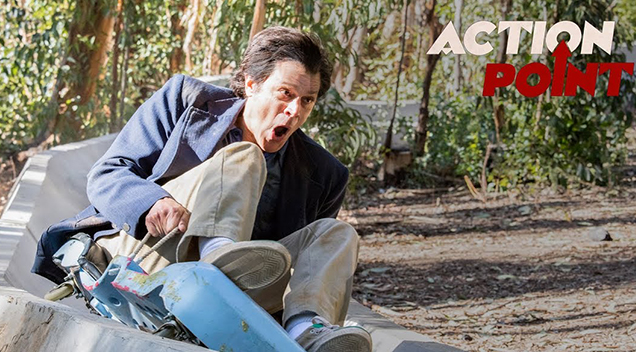 The “Jackass” crew hasn’t pulled any major side-splitting stunts since 2013’s semi-movie “Bad Grandpa”, a film basically creating a little story around one of the Jackass crew’s most popular characters/pranks: dressing up like old people and doing inappropriate things. With the exception of Johnny Knoxville doing a role here and there, no one really heard much from these dim-witted daredevils in some time. When I saw one of the very few visibly aired ads for “Action Point,” I figured it was another “Bad Grandpa” kind of situation but with a story that worked in physical stunts so it could feel like another “Jackass” film of sorts. The result was…well…I was kind of right and I was kind of wrong.

“Action Point” is about a dangerous amusement park run by DC (Johnny Knoxville) and his group of rejects, misfits and fellow “jackass” member Benny (Chris Pontius). They don’t care much for rules or safety and their rides border from risky to downright insane. Things get complicated when a rival amusement park provider (Dan Bakkedahl) threatens to shut down the park in order to expand his own. With his young daughter in tow (Eleanor Worthington-Cox), DC tries whatever half-baked, hair-brained scheme he can to keep the park open and still give everyone a threateningly good time

When Knoxville, Pontius and the other Jackass guys did their own movies; it was basically a strange collection of outlandish stunts that pushed people’s stomachs and funny bones to their absolute bursting limits. There was no rhyme or reason to anything and no story whatsoever. Despite being an actual “movie” movie with a story, characters and such, “Action Point” feels just as erratic as the “Jackass” movies but without the gut-busting, gross-out humor they were known and loved for. Sure, there are plenty of bad taste flavored gags and physical comedy to make things FEEL like it’s the old “Jackass” gang back in action, but the run-of-the-mill kid aimed plot makes it seem like this was meant to be something simple for younger audiences and Knoxville decided to spice it up with a few crotch shots and F-bombs.

All the cartoonish clichés are here: a lovable group of poor misfits, wealthy jerks trying to spoil their fun, estranged father and daughter bonding in that not-so-traditional-but-has-been-done-so-many-times-its-become-traditional-unorthodox-way. Much like the park itself, nothing in this movie works the way it’s supposed to and when it does it’s not as effective or as funny as it thinks. Knoxville and Pontius pretty much play themselves, even though they have moments or relationships meant to portray them as characters; they never come off that way. The father/daughter relationship feels forced at best. There’s no real chemistry, no warmth and no real effort or emotion on display here. Everyone knows the only reason this movie was made and what people came to see was people getting injured hilarious on visibly unsafe park equipment.

It baffles me why so much more effort was put into this cutesy R rated kids story and not the ball smashing comedy we’ve come to expect from Knoxville and Pontius. I’m not denying that their brand of humor is repulsive, disgusting and unapologetically vulgar and vile…but they were REALLY good at it. You should play to your strengths even when your strengths consist of taking tee balls to the groin and shoving toy cars up your rectum. The worst part is what comedy we did get wasn’t very funny. There were a few chuckles here and there, and even a neat idea for a tank/bumper car attraction that I would actually love to see and take part in real life, but most of the humor is one note and relies a lot on repetition and a continually drunk brown bear.

Overall, “Action Point” didn’t last long in the theaters or show off too many ads for a very good reason: it’s not very good. I’ve always loved “Jackass” quality humor and I think I’m one of the few people that think Johnny Knoxville is actually a pretty good actor, but none of the laughter or the talent I enjoyed in the past was evident here. The story was paper thin and too sugar coated for an R flavored treat that failed to produce a good laugh or a good film in general. Did I chuckle a few times? Yeah, here and there, but is the film worth buying or renting for those comedic table scraps? No, not really.