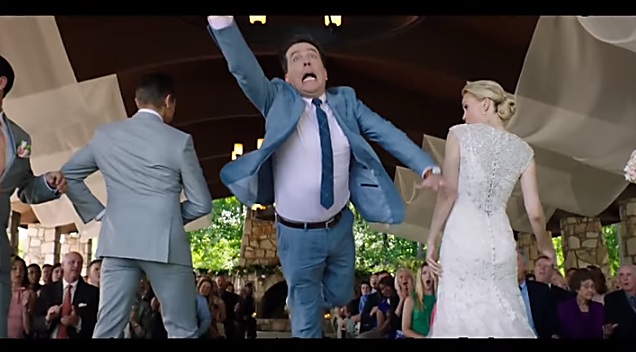 Truth is stranger than fiction and when it comes to movies, you’d be surprised at how many genuinely good real-life stories exist that don’t need tweaking or adjusting. Sadly, many true stories (especially on famous figures) get chewed up and exaggerated into glorified fluff pieces that take too many liberties and tell too few truths about the real deal. When talking about a story as ridiculous and bizarre as this one though, exaggerated truths aren’t as dismantling when the humour and the cast delivering the jokes work out so hilariously well. “Tag” is based on a true story; how much is true or not isn’t the main issue here, the main issue is does it make you laugh?

Four former schoolmates (Ed Helms, Hannibal Buress, Jon Hamm, and Jake Johnson) have been playing a game of tag every month of May for the past 30 years with each other; travelling over the country and doing whatever it takes to win the game. One of their friends (Jeremy Renner) has never been tagged and is retiring once his upcoming wedding is over. Now the gang is back together again and pulling out all the tricks, stunts and smarts they got to tag their friend and break his record before he retires out of the game for good.

There’s something surprisingly exhilarating about keeping a childhood game going in such a passionate, maniacal capacity when you’re a grown adult. It’s a chance to reclaim your youth, maintain decade’s long friendships but most importantly; it’s about having fun. “Tag” is a nostalgic, not-so-family-friendly game that brings people together and makes them laugh at the same time. It’s a simple enough concept that works largely, if not entirely, based on the brilliant cast choices for these five friends. This movie could be about them playing “Uno” for 95 minutes, and if it was comprised of these same comedic stars, they’d find a way to make that hysterically funny too.

Their chemistry together is the glue that holds this silly premise together so naturally, reminding you that no matter how heartfelt, intense or how low things can become, at the end it’s all about having a good time. Helms, Hamm, Johnson, Burress and even Renner play off each other remarkably well. You could actually believe these actors all grew up as real-life childhood friends based on watching them interact so naturally. The stunts they attempt to pull on Renner feel like something out of a “Jackass” movie. There’s a level of creativity that goes above and beyond silly but the film and its characters have no problem embracing it because just like the nature of the game itself; it’s all in good fun and enjoying the time you have with your friends.

There is also an underlining layer of warmth and sorrow that you don’t expect from a movie about grown men playing tag. It comes out of nowhere at times but it’s used sparingly enough that it never drags down everything down or feels out of place. At this film’s core, it’s all about connecting and having those relationships last through the toughest and longest of times and thanks to some excellent supporting stars like Rashida Jones, Leslie Bibb and the funniest woman on the whole film (Isla Fisher), everyone and everything comes together in a bonding balance that makes the comedy feel like such an essential and vital joining component.

I was surprised that for an R rated comedy film, things didn’t get too gutter deep with the humour but I think that helped sell the movie more organically since not everyone has the stomach for R rated trashy humour that most R rated comedy films pander. Two areas I’d cite as weaknesses though are small mind you, one being the ambiguous nature of the film’s ending; though I partially understand seeing as how this was telling the story about their game and not their lives, and the pacing.

The film does take a minute to get things going but once the game kicks into full gear, everything flows at the right velocity, and you become strapped in for a consistently good film for the remainder of the duration. Overall, “Tag” has more going for it than people, critics or even the commercials give it credit. The simple formula of lifelong friends still at it after all these years presents instantly relatable humour that excels largely thanks to the dynamite casting and group chemistry. Sure it’s silly, goofy and a whole bunch of immature nonsense that won’t make you think too critically, but if you’re going to go for a good laugh at the movies this is one of the better ones out there this year.