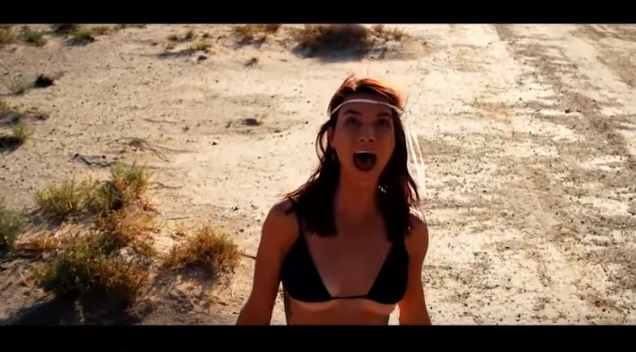 Sometimes the dumber the plot or the title, the greater the interest is attached to the movie. From the likes of “Snakes on a plane” and “Death bed: the bed that eats people”, bad movies with goofy names and premises have suckered people in with their on-the-nose weird concepts and at the very least; people are going to see these films whether they are schlocky fun or just heaping piles of garbage. “Dead Ant” is a film that grabbed my interest with its weird and obviously cheap tongue-in-cheek plot right off the bat. I knew it sounded stupid, I knew it looked stupid but god help me I just could not stop thinking about how such a movie would turn out.

When a burnt out, 80’s rock group called “Sonic Grave” ventures to Coachella to try and spark a comeback, they make a pit stop to pick up some “special” peyote to help inspire them before the show. Things take a wrong turn when they piss off nature (literally and figuratively) and incur the wrath of giant man-eating ants that are coming after the band and everyone in their path. Now Sonic Grave and their crew are held up inside their van; trying to fight off the murderous insects long enough to escape to the concert before their career and their lives end permanently.

It seems kind of hypocritical to complain about the cheesiness and crappiness of a second rate B movie like this for its bad effects and plot, but even knowing what I was signing up for, there is a good way to do a bad movie and then there’s…this way. The effects are Syfy channel original movie level bad, which isn’t good but it’s clear the budget went to the star power behind the film which is the true saving grace but not successful enough to make this THAT memorable. The film seesaws between being balls-to-the-wall goofy to being too serious or too discombobulated to know what direction it wants to take everything. The band and the cast are loads of fun and seeing them struggling to fight off ants with guitars and idiotic plans were absolutely worth it.

But then, to keep switching back to this off-putting Native American gun nut subplot and how their peyote is responsible for bringing these ants out just…kind of stalls the film. They take it way too seriously and assume it’s badass looking because it acknowledges the goofiness of the plot so that makes it work; it doesn’t. As I said before, the casting department picked a perfect bunch of stars for this misfit, one-hit-wonder band: Sean Astin, Jake Busey, Tom Arnold, Leisha Hailey, and Rhys Coiro are a great team and produce comedic home runs more often than not.

Surprisingly enough, Tom Arnold is the one who really steals the show here. He is rampantly hilarious and is so crazed and ridiculous, you never know what he’s going to say next and it just keeps on getting funnier every time. I love Jake Busey’s hippie base player persona and even when things get gory and bodies start piling; this crew still knows how to get a few laughs out of me. The key word in that last sentence is “few.” Try as it might, “Dead Ant” can never keep up its humor, its horror or its momentum. It’s too serious at times to fit the big bug plot and never goes far enough with its absurd origins to take full advantage of the B movie tropes.

The R rating is well warranted but not well delivered. The use of nudity and sex at times is uncomfortable and feels like something you’d see in a “Friday the 13th” movie and not here. The bad movie idea was not handled in a well enough way to be considered a good/bad movie and that’s because the movie either went too far or too little with its tones and it leaves the film uneven and also messy, not a good mix for a film trying to be so bad it’s good.

Overall, “Dead Ant” knew what it was doing with its cast; Tom Arnold is a scene-stealing riot and the plot had so much goofiness gold going for it, but it never fully made the B movie grade like it wanted to. The graphics are atrociously bad, its tone is all over the place and it wasted its best assets in exchange for its worst ones.