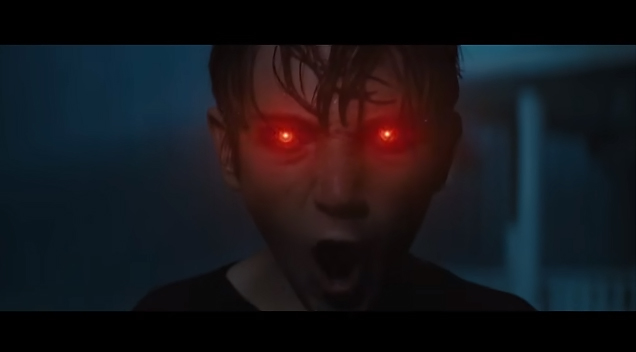 With superhero films dominating box offices, word of mouth and large bulks of online hype, unless you’re a strong fan it’s easy to see how comic book superhero films could wear out its welcome with audiences. Now that Marvel’s cinematic universe has reached such an epic milestone and Fox’s X-men is circling the drain, going to need something fresh if anyone wants to still see superpowered people dominating the silver screens. “Guardians of the Galaxy” director himself, James Gunn; produces a unique twist on superheroes (specifically ‘Superman’) with a newly produced movie unlike any other before – a superhero horror movie with “Brightburn.”

As stated before, the story is basically a dark twist on the “Superman” story: a young child in a spaceship from another world crash lands on a farm run by Kyle and Tori Breyer (David Denman and Elizabeth Banks) and they decide to take him in and raise him as their own. After his 12th birthday, Brandon (Jackson A. Dunn) starts having weird dreams and negative reactions to others. Learning he has incredible superpowers, he decides to use them to get back at all those who have wronged him (be it minor or major) and instead of using his gifts to protect others, he’s using them to make a blood-soaked name for himself as a truly sinister superhero.

I found it amazing how easily hyped I was for this movie considering how simple its premise is. Still, “Brightburn” truly lives up to what it promises and delivers the world’s first superhero horror movie and while it doesn’t do anything outrageously or insightfully deep with its premise, it still easily sends shocks, chills, and thrills down your spine and takes its dark hero aspect to places you never thought it would. “Brightburn” is much more than an amped up “evil kid” story. Anyone who has seen any superhero movie knows that all of them feature (at least once) the scene where the hero is learning their new powers for the first time and watching robbers or bad guys try and stop them with knives or guns and then failing miserably; beaten soundly by the hero’s abilities.

“Brightburn” flips it around by making the villain the one learning about his powers and all the good people in the world being helpless against his new abilities. The tension and intensity focus more on the horror and gore than Brandon’s motivations. There are allusions to the source hinted in the film, but for the most part, we just see Brandon grow darker and more savage with his power usage; leading to some truly horrific imagery and unexpectedly intense gore. The creepiness and horror elements all flow beautifully through the visuals and the look/design of Brandon with his superhero outfit on.

It’s clear the movie’s biggest flaw is its lack of exploration of material, there’s more teased for sequel/universe expansions and more could have gone into assessing why Brandon got these thoughts and how his descent into darkness was really happening. I greatly appreciated the cleverness of the characters, no one acted stupid or without reason. Even when Brandon’s actions are hard to explain, the fact some can justify them and some can condemn it reasonably felt like a natural reaction from each character to each situation. Despite the subject of the film’s story, the budget remained fairly low and I truly hope that allows it to make enough money to secure a sequel because I truly feel so much more can be explored here and expanded on in future films.

Overall, “Brightburn” is something dark, different but also scary and somewhat similar to what we have seen before. The unexpected high gore levels and disturbing visuals definitely leave an imprint on you when you leave the theater. The cast was great, the tone was painfully dark and it generates plenty of prime material for future stories. However, the film rides its concept too closely and safely to be THAT bold and daring and the unbearably bleak tone does question reply value. In the end, I hope “Brightburn” and its universe continues to grow because while this wasn’t the best first bite, it’s definitely left me hungry for more.