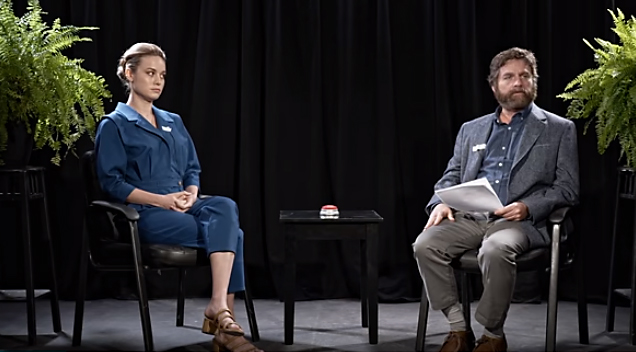 As “Saturday Night Live” will tell you, making movies out of skits is not a terribly smart business decision. With the exception of “Wayne’s World,” every film based off a skit like “Night at the Roxbury,” “The Ladies Man” and “Superstar” has been a disastrous failure with both audiences and box office grosses. Will Ferrell’s “Funny or Die” network has accumulated a great deal of talent, sketches, and recognition that they produce high-quality comedy in small, short video bursts that keep them relevant without becoming oversaturated or longwinded. Zach Galifianakis has a show called “Between two ferns,” a short comedic interview series where he awkwardly talks to and insults celebrity stars in this offbeat “Funny or Die” original series.

The film naturally follows Zach wanting more than his dinky little public access interview show currently offers. When a disaster demolishes the set and forces Will Ferrell to rethink Zach’s worth. Ferrell challenges Zack to complete 10 episodes with 10 different celebrities on the road to meet a deadline and if he pulls it off, he’ll receive his own network show. Now Zach is on the road meeting big name celebrities like Benedict Cumberbatch, Paul Rudd, Brie Larson, Peter Dinklage and others trying to save his weird and awkward show.

It’s kind of hard to review a movie based on a show like this, truth be told, it’s even weirder to understand HOW someone can even MAKE a movie out of an interview talk show skit like this. Luckily, “Between two ferns: the movie” manages to keep what made it funny and great consistent, plentiful and it doesn’t try and make a weird story or emotional journey to the extent of previous skit based films have attempted. In a lot of ways, the movie plays like you’re watching a bunch of “Between two ferns” episodes back to back; watching one celebrity get awkwardly roasted and then immediately jumping right into the next one. It doesn’t sound like you could fill a movie out of that but it does and it helps that the writing and comedic timing of everyone involved is spot on and is some of the best the “Two ferns” show has ever produced.

The story involving Zach and his crew going around meeting random celebrities in unusual places even helps add to the humor of new, unpredictable situations like one involving John Legend and Chrissy Tiegen and a visit to Peter Dinklage’s house. There is a wraparound story involving a student documentary crew filming and following Zach and his staff around but it doesn’t go anywhere and the same can be said of Zach’s crew. Similar to “Borat,” there are small roles with characters to try to fill in supporting roles in-between the interviews. They don’t really develop the characters to any extent so they serve more like funny commercial breaks before Zack gets weird with the next guest.

It’s hard to cite this as a criticism as I didn’t want or expect anything more than just lots of hilarious interviews with big-name stars, and on that front, they definitely delivered. But as a film with an overall structure, it misses a golden opportunity to explore more humorous chances and scenes with Zach’s crew. Their introduction was hysterical, it felt like an R rated version of “The Office” and if they had more of that quality sprinkled throughout the rest of the crew’s scenes, this film would have been even funnier than it could have imagined.

All in all, “Between two ferns: the movie” actually DOES work as a movie. It’s got a great cast of stars with impeccable comedic delivery and writing; it keeps what works and sticks to its strong suits from start to finish. The cast could have been used a bit more creatively and doubled up the comedic potential but overall, whether your familiar with the skit series or not, this is a comedic gem you don’t want to miss.