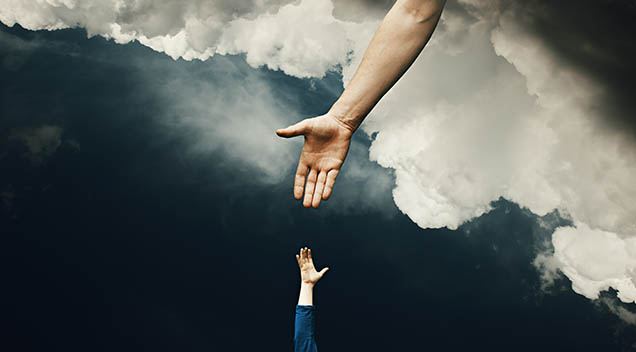 Honestly, I’ve been through a tough time recently. A time where everything I knew was turned upside down and inside out. A time where I met the “black dog” – depression. It doesn’t help that in just the past few months, I have started to fear that the end of the world is upon us, thanks to the COVID-19 pandemic. The sheer horror of this fast-moving infection is absolutely terrifying. I didn’t turn to medication and I wish I could say that I turned to my faith but I was so far down that I had trouble doing even that.

That was probably the hardest thing about it. I thought he had left me alone so I stopped going to Him. But, I had forgotten who He was. He is the shepherd who would leave 99 sheep behind to look for the one lost one….and He came looking for me. But He didn’t send angels or saints, He sent family…He sent friends.

That’s the thing about God. He’s subtle. You won’t hear a booming voice from heaven, you’ll hear the quiet whisper of a friend. You’ll feel Him hugging you but through the arms of your parents. You’ll get His message but it’ll be through a phone call or even a text from a friend.

That was my mistake. I was looking for grand gestures. I was waiting for Him to tell me why I was going through all this that I missed when my mom tried to tell me. Maybe I would have healed faster if I wasn’t so busy looking up at heaven for answers. In that way, I was reminded of the story of the man who lived next to a river. One day, he heard a news report of a big storm that would cause the river to overflow and wash his house away. But he ignored it saying: “God loves me. God will save me,” and he stayed where he was. The storm came and the river flooded. As the waters grew higher, the man climbed onto his roof. A neighbour in a boat came and said: “Jump into the boat! I’ll take you to safety!” But the man refused, saying: “God loves me. God will save me,” and his neighbour, shaking his head, left. The river was getting higher and it wasn’t going to be long before the man’s home was swept away. A helicopter hovered above the nearly submerged house and a rescue worker leaned out. “Hey you!” he screamed at the man. “We’ll lower a rope and lift you to safety!” Again, the man refused and again, said: “God loves me! God will save me!” and watched as the helicopter flew away. A few minutes later, his home was swept away and the man drowned.

When the man found himself in heaven and in front of God, he angrily screamed at Him, “I thought you loved me! You were supposed to save me!” God leaned down and said to the man: “I sent you a news report, your neighbour in a boat and a rescue helicopter. What are you doing here?!”

So, don’t make my mistake. Don’t look for answers to come directly from heaven. Look for them in the voice and in the arms of a loved one. Look out for His message in the every day – an article in a magazine, a song on the radio. He is everywhere and I guarantee, He will use everything in creation to get to His one lost sheep.