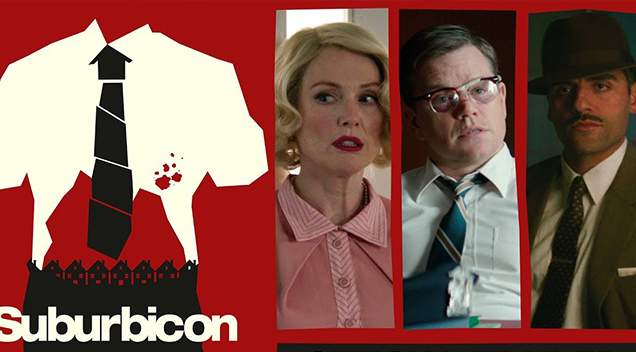 If the likes of “Desperate Housewives” and “Get Out” were meshed into one screwball of a movie, Surburbicon would be the result of it all. A social thriller/horror movie directed by George Clooney and written by the Coen brothers, who are supposedly known for their grit and black humor, attempted to highlight the unsung benefits of being White American in this flick. Set in the 1950’s “perfect” upper-middle-class Los Angeles region of Surburbicon, with their perfectly manicured lawns and overly- exaggerated “nice” demeanor of the inhabitants, there was a recipe for disaster that was brewing in the midst.

The premise of the film follows Gardner Lodge (Matt Damon), a corporation man who “grieves” the loss of his disabled wife, Rose, due to recent ransom by the mafia. Little did they know, that Lodge and Rose’s twin sister, Margaret (both played by Julianne Moore) premeditated the whole death to get insurance money. Supposedly, this subtle murderous deed of the “white friendly neighbour” creates a conceit of the blatant racist yet terrorizing incidence of the black neighbours, which meant to highlight how white privilege came into play as the Lodges never suffered the consequences of their actions.  The black family had to go through terrorizing torments of their white counterparts, just because they merely exist. However, the movie was not the focused on this conceit per se; instead, it was all background noise.

Although the intentions of the movie stem from the right place, the execution of the movie were somewhat all over the place. The film itself is a resurrected script from the Coen brother’s archives. Although, the dark humorous tones of the film are nuancedly present from the off-coloured deaths of the character to the not-so-subtle dramatic irony between audience and the character’s intentions and so on and so forth. However, the film fails to bring something refreshing to the plethora of racially charged movies that were churned out this year. Jonathan Peele’s Get Out provided a refreshing perspective of racism through the eyes of the American white liberals. Unlike Get Out, the film is somewhat a regurgitation of the blatant racism that occurred in the 1950’s—films like the Help and Hairspray has already touched on that aspect of racism—where the underlying message is that African-American is a sub-par to the superior White-Americans race.

Despite, the thinly executed message, the performance by the ensemble cast was outstanding, especially Oscar Issac and Noah Jupe who play Roger and Nicky, respectively.  Issac who played the cunning yet equally calculating investigator appeared around the three-quarter mark, interrogates Margaret about their insurance claim on their sister’s death. The charismatic performance by Issac was probably the only highlight of the film that got audiences excited. While Jupe who played Nicky with an unassuming curiosity yet at the same time, he possesses a big deal of maturity when facing the cruel intention of his parents, was something to be noted.

, has the potential to cultivate a unique message on white privilege in the backdrop of the 1950’s America, it has a loose execution. Although, there is an outstanding performance from the ensemble. The moments that were noteworthy were the tinges of Coen brother’s signature dark humour which acted as a security blanket when the movie’s direction went into hysterical choppiness.