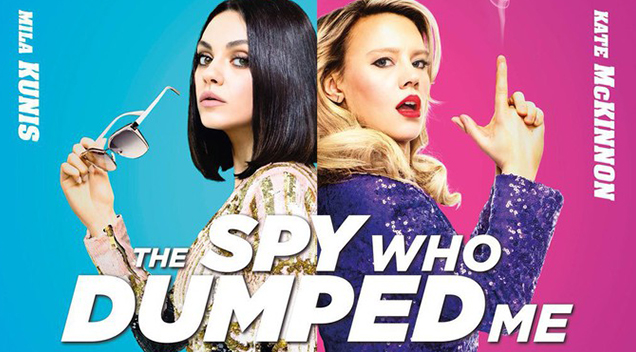 The Spy Who Dumped me is a mild thriller and comedic film which was directed by Susanna Fogel and co-written by Fogel and David Iserson. A cast of A-listers stars the film with the movie being led by big names; Mila Kunis, Kate McKinnon, Gillian Anderson, Justin Theroux and Sam Heughan. The film’s Sydney premiere occurred at George Street’s Event Cinemas on the 6th of August 2018.

The film follows the lives of two thirty-year-old best friends residing in Los Angeles, who have been friends since childhood. Audrey, who is played by Mila Kunis has been recently dumped by her ex-boyfriend unexpectedly and she wonders what she has done wrong. After days of missed calls, he is yet to reply to any of her messages. Morgan, Audrey’s best friend and roommate, who is played by Kate McKinnon, arrives at their apartment and convinces Audrey to burn all of her ex-boyfriend’s things to help ease the pain of the breakup. To warn Drew (Audrey’s ex-boyfriend) that she is going to destroy all of his things, she messages him one last time in the hopes that he will finally reply. He then suddenly appears out of nowhere breaking through her window’s apartment, which was the start of an intense journey to save the world.

The journey begins at the supermarket that Audrey is working at. Two CIA agents approach her while she is completing an order at the store’s register and aggressively pushes her towards to their van. She is questioned countlessly about the whereabouts of Drew and she denies any contact with him. Audrey is confused and is in utter disbelief that they were accusing Drew of being an uncover spy. She rushes home after the intense interrogation and explains to Morgan all of the bizarre events that have occurred. During their rough encounter with Drew earlier that week, he gave Audrey an item and instructions to take it to Europe and that if she didn’t proceed with his request, many innocent people will be hurt or killed. She felt obligated to, and due to her kind nature, she decided to fly to Europe spontaneously with Morgan to follow through with her commitment to Drew.

The film was a slow burn. It took a quarter of the film to take off with excitement but once the film’s plot began to reveal itself, it continued to enhance the audience’s reaction and laughter. Kunis and McKinnon were the perfect comedic pair. With clever sentences and amusing responses coming from the right, left and centre of the film. The script was followed impeccably and the acting shadowed through with the story’s objective. Although the genres of thrillers and comedy are usually not paired together, the witty banter and the random action scares did complement each other well. The film has an overall heartfelt message about the importance of family, friendships and commitment. The audience cheered with excitement at the ending of the film and during the ending credits scene but I’ll leave that for you to see!